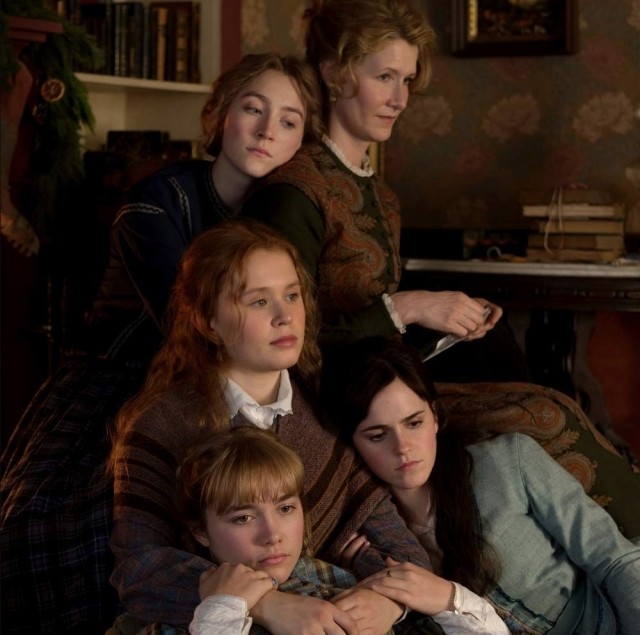 Louisa May Alcott's father Bronson Alcott approached publisher Thomas Niles about a book he wanted to publish. Their talk soon turned to Louisa. Niles, an admirer of her book Hospital Sketches, suggested she write a book about girls which would have widespread appeal. She was not interested at first and instead asked to have her short stories collected. He pressed her to do the girls' book first. In May 1868, she wrote in her journal: "Niles, partner of Roberts, asked me to write a girl's book. I said I'd try."

She later recalled she did not think she could write a successful book for girls and did not enjoy writing one. "I plod away," she wrote in her diary, "although I don't enjoy this sort of things." By June, she sent the first dozen chapters to Niles and both thought they were dull. Niles's niece Lillie Almy, however, reported that she enjoyed them. The completed manuscript was shown to several girls, who agreed it was "splendid". Alcott wrote, "they are the best critics, so I should definitely be satisfied."

Alcott wrote Little Women “in record time for money.” Since Alcott never married and wrote that she was “often lonely and in ill health,” some people questioned how she was able to write so beautifully and reflectively about "American home life.”

When using the term “little women” Alcott was drawing on Dickensian meaning. Little Women represented the time period in a young woman's life where childhood and elder childhood was "overlapping" young womanhood. Each of the March sister heroines had a harrowing "experience" that alerted her and the reader that "childhood innocence" was of the past and "the inescapable woman problem” was all that remained.

Margaret "Meg" March Brooke
Sixteen at the opening of the book, Meg is the oldest sister. She is referred to as a beauty, and is well-mannered. As the oldest, Meg runs the household when her mother is absent. This includes trying to keep her sisters from arguing, and they sometimes accuse her of lecturing them too much.
Meg is employed as a governess for the Kings, a wealthy local family. Though the March family is poor, their background is what was called 'genteel', and Meg attended some society balls and parties.
Meg marries Mr. John Brooke, Laurie's tutor. They had twins, Margaret "Daisy" and John Brooke "Demi" (short for Demi-John).
Once Meg and John are married, Meg becomes “dependent” on him and “isolated in her little cottage with two small children.” Meg is the complacent daughter who did not “attain Alcott’s ideal womanhood” of equality. Alcott showed the virtues of democratic domesticity in Little Women. According to Elbert, “democratic domesticity requires maturity, strength, and above all a secure identity that Meg lacks.”

Josephine "Jo" March Bhaer
The second-oldest of four sisters, Josephine March is a tomboy; Mr. March has referred to her as his "son Jo" in the past, and her best friend Laurie sometimes calls her "my dear fellow." When her father went to volunteer in the Civil War, Jo wanted to fight alongside him. She is clumsy, blunt, opinionated, and jolly. The tomboy embodied in Jo March “spoke to changing standards of girlhood. Tomboys first became a major literary type in the 1860s. They were not only tolerated, but even admired—up to a point, the point at which girls were expected to become women.”
Jo has a hot temper which often leads her into trouble in spite of her good intentions, but with the help of her own sense of humor, her sister Beth, and her mother she works on controlling it.
Jo loves literature, both reading and writing. She composes plays for her sisters to perform and writes short stories. She initially rejects the idea of marriage and romance, feeling that it would break up her family and separate her from the sisters she adores. While pursuing a literary career in New York City, she met and began to love Friederich Bhear, a German professor, as an equal partner. “They decide to share life’s burdens just as they shared the load of bundles on their shopping expedition.”
Jo is the most popular and remembered of all the characters in Little Women. Jo did reject Laurie to marry Professor Bhaer who “is no schoolgirl’s hero, but Jo believes he is better suited to her than Laurie. The crucial first point is that the choice is hers, its quirkiness another sign of her much-prized individuality.” “Bhaer has all the qualities Bronson Alcott lacked: warmth, intimacy, and a tender capacity for expressing his affection—the feminine attributes Alcott admired and hoped men could acquire in a rational, feminist world.” Jo writes the first part of Little Women during the second portion of the novel. According to Elbert, "her narration signals a successfully completed adolescence.”

Elizabeth "Beth" March
Beth, thirteen when the story starts, is described as shy, gentle and musical. As her sisters grow up they begin to leave home, but Beth has no desire to leave her house or family. She's especially close to Jo: when Beth develops scarlet fever after visiting the Hummels, Jo does most of the nursing and rarely leaves her side. Though she recovers, her health is permanently weakened.
As she grows, Beth begins to realize that her time with her loved ones is coming to an end. Finally, the family accepts that Beth will not live much longer. They make a special room for her, filled with all the things she loves best: her kittens, piano, father's books, Amy's sketches, and her beloved dolls. She is never idle; she even knits and sews things for the children that pass under her window on the way to and from school. But eventually even that becomes too much for her, and she puts down her sewing needle, saying that it grew "so heavy". Beth's dying has a strong impact on her sisters, especially Jo, who resolves to live her life with more consideration and care for others.
The main tragedy during Little Women was the death of beloved Beth; her “self-sacrifice is ultimately the greatest in the novel. She gives up her life knowing that it has had only private, domestic meaning.”
Beth was modeled on Elizabeth Hoar of Concord, Massachusetts, future mother of publishing scion Sherman Bowles.

Amy Curtis March Laurence
The youngest sister—age twelve when the story begins—Amy is interested in art. She is described by the author as a "regular snow-maiden" with curly golden hair and blue eyes, "pale and slender" and "always carrying herself" like a very proper young lady. Often "petted" because she is the youngest, she can behave in a vain and spoiled way, and throws tantrums when she is unhappy.
Her relationship with Jo is sometimes strained. When Laurie and Jo go skating, Amy tags along after them, but she arrives at the lake too late to hear Laurie's warning about thinning ice. Under Jo's horrified stare, Amy falls through the ice, and is rescued by Laurie's prompt intervention. Realizing she might have lost her sister, Jo's anger dissolves and the two become closer. When Beth is ill with scarlet fever, Amy is sent to stay with Aunt March as a safety precaution. Aunt March grows fond of her, and makes the suggestion that Aunt Carroll take Amy with her to Europe. There she meets up with Laurie, and shortly after Beth dies, they marry. Later, Amy gives birth to daughter Elizabeth (Beth), named after her deceased sister. Her daughter appears to have similarities with Beth, as she is very ill.

G. K. Chesterton noted that in Little Women, Alcott "anticipated realism by twenty or thirty years," and that Fritz's proposal to Jo, and her acceptance, "is one of the really human things in human literature."[19] Gregory S. Jackson argued that Alcott's use of realism belongs to the American Protestant pedagogical tradition that includes a range of religious literary traditions with which Alcott was familiar. The nineteenth-century images he produces of devotional guides for children provides an interesting background for the game of "playing pilgrim" that, in part, comprises Book One's plot structure.[20]

When Little Women was published, it was well received. During the 19th century, there was a “scarcity of models for nontraditional womanhood” which led more women to look toward “literature for self-authorization. This is especially true during adolescence.”[21] Little Women became “the paradigmatic text for young women of the era and one in which family literary culture is prominently featured.”[22] Adult elements of women’s fiction were in Little Women, such as “a change of heart necessary” for the female protagonist to evolve in the story.[3] However, even with much critical acclaim, there were criticisms. Some felt that Little Women was the beginning of “a decline in the radical power of women’s fiction,” partly because women’s fiction was now being idealized with a hearth and home children’s story.[23] Both women’s literature historians and juvenile fiction historians agreed that Little Women was the apex of this “downward spiral.” Elbert argued that Little Women did not “belittle women’s fiction" and that Alcott stayed true to her “Romantic birthright.”

Little Women’s popular audience was responsive to ideas of social change as they were shown “within the familiar construct of domesticity.” Even though Alcott was supposed to just write a story for girls, her main heroine, Jo March, became a favorite of many different women, including educated women writers through the 20th century. The girl story became a new “new publishing category with a domestic focus that paralleled boys’ adventure stories.” Other women, such as Jewish immigrant women, also found a close connection to Little Women. One reason Little Women was vastly popular was because it was able to appeal to different classes of women along with different nationalities. Through the March sisters, women could relate and dream where they may not have before. “Both the passion Little Women has engendered in diverse readers and its ability to survive its era and transcend its genre point to a text of unusual permeability.”

Young girls had a social perception that marriage was their end goal. This was evident after the publication of part one of Little Women when girls wrote Alcott asking her “who the little women marry.” The unresolved ending added to the popularity of Little Women. Sicherman said that the unsatisfying ending worked to “keep the story alive” almost in hopes that if the reader read it enough times the story would conclude differently. “Alcott particularly battled the conventional marriage plot in writing Little Women” Alcott did not have Jo accept Laurie’s hand in marriage; rather, when she finally had Jo get married, she picked an unconventional man for Jo’s husband. Alcott used Friederich to “subvert adolescent romantic ideals” because he was much older and seemingly unsuited for Jo.

Based on a 2007 online poll, the National Education Association named the book one of its "Teachers' Top 100 Books for Children." It was one of the "Top 100 Chapter Books" of all time in a 2012 poll by School Library Journal.