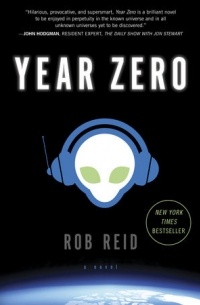 0
Издания и произведения
An alien advance party was suddenly nosing around my planet.
Worse, they were lawyering up. . . .

In the hilarious tradition of The Hitchhiker’s Guide to the Galaxy, Rob Reid takes you on a headlong journey through the outer reaches of the universe—and the inner workings of our absurdly dysfunctional music industry.

Low-level entertainment lawyer Nick Carter thinks it’s a prank, not an alien encounter, when a redheaded mullah and a curvaceous nun show up at his office. But Frampton and Carly are highly advanced (if bumbling) extraterrestrials. And boy, do they have news.

The entire cosmos, they tell him, has been hopelessly…
Развернуть